Warning: unlink(/tmp/jnewslibrary-NamY3W.tmp): No such file or directory in /home/customer/www/gasiantimes.com/public_html/wp-admin/includes/class-wp-filesystem-ftpext.php on line 142
 England fans celebrate beating Germany at Euro 2020 - Georgia Asian Times
ABOUT
Advertise in GAT
Contact us

It’s nothing but history now, because England has finally beaten Germany again in a knockout match at a major soccer tournament.

It’s nothing but history now, because England has finally beaten Germany again in a knockout match at a major soccer tournament.

“It’s absolutely brilliant as an old man, after seeing us keep losing to the Germans for a while,” said England fan Steve Line, a 61-year-old gardener from Milton Keynes who made his way to Wembley Stadium on Tuesday for the historic night. “It’s put it to bed now, hasn’t it? Put it to bed.”

Raheem Sterling and Harry Kane were the ones who did the hard work, scoring a goal each to give England a 2-0 victory over Germany in the round of 16 of the European Championship.

The last time England had beaten a German team on such an occasion was in the 1966 World Cup final. Since then, there were many heart-breaking losses, like at the 1970 World Cup in Mexico, at the 1990 World Cup in Italy, and at the 1996 European Championship at Wembley Stadium.

The Germans beat England in a penalty shootout in those Euro ’96 semifinals, and it’s been a source of anguish for the fans ever since.

“I remember the pain of 1996, as a 12-year-old and having to go to school the next day,” said Terence Michael Anthony, now a 37-year-old accountant from London. “I hoped we would get revenge eventually, just not 25 years later.

“When those goals went in, it felt like a quarter of a century of emotion poured out in the stands.”

Only about 40,000 fans were at Wembley to witness the epic victory because capacity was reduced amid the coronavirus pandemic, but the roaring crowd screamed and cheered like twice that much.

England will next play Ukraine in the Euro 2020 quarterfinals on Saturday in Rome. If they win that, the English will come back to Wembley for a semifinal match against either the Czech Republic or Denmark. The final is scheduled for July 11.

“I think it’s just a relief now that the draw opens up we’ve got a real chance of making it to the final,” said Richard Mills, a 36-year-old Payments Manager from London.

“It’s good to get one over on the Germans, we owed them. But it’s not so much revenge. We’re a massive football nation, we need to be performing at the top level … England are up there with the elite again.” 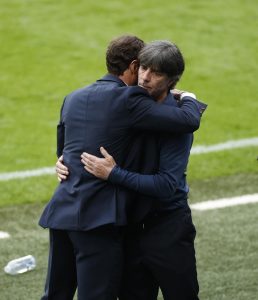 The spot in the quarterfinals follows a run to the semifinals at the last World Cup in Russia, and all of it under coach Gareth Southgate — a former England defender who knows all about the team’s history with the Germans.

He missed the decisive penalty kick in the shootout loss in 1996.

Hawks romp to 110-88 win without Young, Giannis goes down

Hawks romp to 110-88 win without Young, Giannis goes down


Warning: unlink(/tmp/jnewsfirstload-W9Y3CZ.tmp): No such file or directory in /home/customer/www/gasiantimes.com/public_html/wp-admin/includes/class-wp-filesystem-ftpext.php on line 142