Electric vehicle shoppers have an increasing number of models to choose from. There are nearly two dozen EVs on the market today, and that selection will only grow over the next eight months. Here are five upcoming EVs, organized by price, that the experts at Edmunds are most excited to see in 2021. 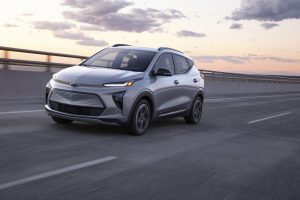 As the name suggests, the Bolt EUV is related to Chevrolet’s existing Bolt hatchback. Compared to the Bolt, it has a longer, more SUV-like shape and offers more rear legroom. It can also be optioned with features not available on the standard Bolt, such as a panoramic sunroof and ventilated front seats.

Expect the Bolt EUV to get around 250 miles of range. Like the regular Bolt, it’s only front-wheel-drive, and there’s no option for all-wheel drive. But it will offer General Motors’ Super Cruise. This hands-off driving system allows the car to accelerate, brake and steer itself on more than 200,000 miles of highway and limited access roads. The Bolt EUV is the first non-Cadillac vehicle to get this system. 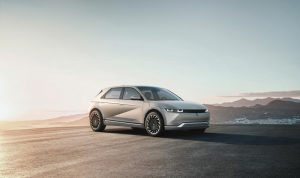 Today’s Hyundai Ioniq Electric serves as the entry point to Hyundai’s electrified offerings, but the automaker will soon apply that name to a line of sedans and crossover SUVs built on a dedicated EV platform. First up is the 2022 Hyundai Ioniq 5.

The Ioniq 5 is similar in size to the Honda CR-V, but since there’s no engine, its front end is shorter. The extra length is between the wheels, which should translate to legroom that rivals that of a midsize crossover. Other highlights include an abundance of tech features and an available dual-motor powertrain good for about 300 horsepower and an estimated range of 250 miles. 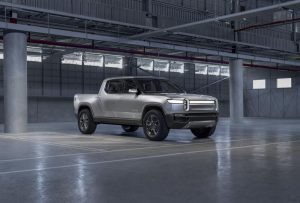 The first mass-market electric pickup truck won’t come from Ford, Chevrolet or Tesla, but rather a Detroit-based startup. In terms of size, the 2021 Rivian R1T slots between midsize and full-size trucks, but its capabilities are closer to what you’ll find in the latter. Rivian says the R1T can tow up to 11,000 pounds, or slightly less than a Ram 1500 crew cab.

The R1T’s specs as an electric vehicle are also notable. The initial Launch Edition is fully loaded and, like all R1Ts, features an electric motor at each wheel. They produce a whopping 753 horsepower combined, unlocking an advertised 0-60 mph time of just 3 seconds. Under the floor is a large battery pack that Rivian says can deliver up to 300 miles of range. 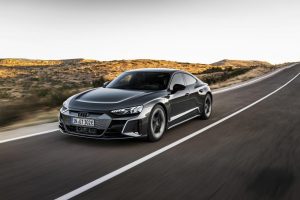 This sleek-looking luxury sedan is Audi’s newest EV. It follows the e-tron SUV that debuted a few years ago. The GT’s dual electric motors produce between 469 horsepower and 637 horsepower total, depending on the trim level and driving mode, allowing it to sprint from a stop to 60 mph in as little as 3.2 seconds. Audi says the car will have up to 238 miles of range and a charging port on each side of the car for greater plug-in convenience.

Inside, the e-tron’s multiple display screens and angular surfaces give the cabin a futuristic feel. There are also eco-conscious touches, including recycled materials used in the seat fabric and interior trim. The result is a distinctive cabin that helps differentiate the e-tron GT from the Porsche Taycan upon which it’s based. 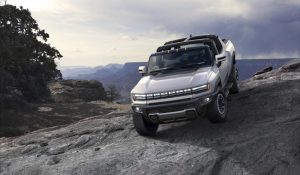 General Motors is looking to shed the Hummer brand’s gas-guzzling image by relaunching it as an electric pickup. But the company is also reluctant to give up the Hummer’s off-road cred, so when the 2022 GMC Hummer EV launches later this year, it will be packed with goodies including a body-raising air suspension, all-terrain tires and CrabWalk mode, which allows the vehicle to move diagonally from a stop.

The initial top-spec Edition 1 model is the only Hummer EV we’ll see this year, and reservations are already full. Those who snagged a slot will be treated to a truck with three motors (one up front and two in the rear) that produce a rather outrageous 1,000 horsepower and accelerate this truck from zero to 60 mph in 3.5 seconds. GMC estimates the Hummer EV will deliver 350 miles of range.

EDMUNDS SAYS:EV shoppers have a respectable variety of EVs to choose from. But waiting until the summer or fall will get you an even more diverse lineup. – AFP