Tokyo, April 17, 2018 — Japan today hailed local school clerk Yuki Kawauchi, the surprise winner of the Boston Marathon, who called work after his victory to ask for an extra day off to celebrate.

When Kawauchi ploughed across the finish line yesterday, despite the coldest start in 30 years and steady rain, he became the first Japanese runner to win the race since 1987.

In a poetic twist of fate, that was the year Kawauchi was born.

The humble bureaucrat, who has no coach and no sponsor and trains on his free time, has been hailed across Japan for the shock triumph.

“It is a tremendous achievement to win Boston, which is one of the highest quality races in the world,” Toshihiko Seko, the Japanese runner who won the race in 1987 and 1981, told national broadcaster NHK.

“In the horrible conditions that everyone hates, Kawauchi managed to maintain the toughest spirit, more than anyone else,” he said.

In a country that values modesty and hard work, Kawauchi’s quiet dedication has garnered widespread admiration.

At the Kuki High School in Saitama region, where Kawauchi works, officials said he had been in touch — to ask about an extra day off.

‘The greatest day of my life’

Apparently not expecting his win, Kawauchi had planned to fly back to Japan the morning after the race and start working from Wednesday evening. 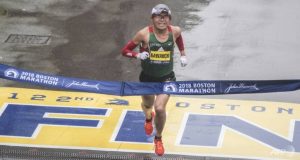 “He called to ask for an extra day off because he has to attend functions there,” said school official Yasuhiro Mitsui.

“The principal told him ‘Congratulations, you have done very well’,” Mitsui said, adding that the holiday extension had been granted.

No celebrations were being planned at the school, Mitsui said, in keeping with Kawauchi’s low-key approach to his running.

His training is done outside working hours, and he competes in races on weekends or on holiday.

“Generally he has kept his work and marathon separate. We support him, like we support others, by covering his work while he is gone,” Mitsui said.

Marathons are hugely popular in Japan, and Kawauchi is well known for juggling his day job with his running passion.

“I want to show that you can compete at the world level even if you have a job like I do,” he has said of maintaining the balance.

After his win Monday, a tearful Kawauchi declared: “This is the greatest day of my life.”

“There was no one who thought I would be the winner. I was able to prove that marathon is a sport in which you cannot tell what happens until the finish.”

But while the Boston victory might be the biggest of his career, but it is far from his only marathon win.

In fact, the 31-year-old has racked up five consecutive marathon wins with his latest victory, including races in Japan, the US, and Taiwan.

Last month, he was recognized by the Guinness World Records for the highest number of marathons run in under two hours and 20 minutes — 78 in all.

And he won’t be resting on his laurels long, with plans to run a half marathon this weekend in the Japanese city of Gifu, he told Japanese media.