Towering guard DiVincenzo dominated the Michigan defense with a devastating first half display as the top-seeded Wildcats cruised home for a 79-62 win at San Antonio’s Alamodome in Texas. 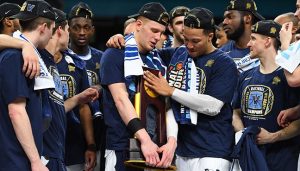 Villanova were heavy favorites for Monday’s NCAA showpiece, the climax of the “March Madness” knockout competition that is one of the highlights of the US sporting calendar.

Michigan made a fast start, with Moritz Wagner’s layup helping the Wolverines jump out to a 21-14 lead midway through the first half.

However, DiVincenzo and Mikal Bridges hit back with jumpers to cut the Wolverines’ lead to three points before two Colin Gillespie free throws put Villanova to within one at 21-20.

DiVincenzo then drained a superb three-point jump shot with just over six minutes of the half remaining to put Villanova ahead.

Although Michigan rallied through Muhammad-Ali Abdur Rahkman, DiVincenzo again took Villanova clear with a three-pointer and a layup in quick succession to put the favourites 30-26 ahead with 4min 7sec remaining in the half.

DiVincenzo traded dunks with Michigan’s Charles Matthews but moments later provided the assist for Omari Spellman to put Villanova 34-28 ahead.

A three-pointer from Jalen Brunson handed Villanova a nine-point cushion at the half-time break, with a 37-28 lead.

Wagner reduced the deficit early in the second half, but Villanova were increasingly dominant, and a burst of scoring soon had them a commanding 15 points clear at 48-33.

Michigan attempted to staunch the flow of points but both Duncan Robinson and Jordan Poole missed jumpers before Bridges drained another three-pointer to put the Wildcats 51-33 ahead.

The Wolverines cut Villanova’s lead to 12 points with quick scores from Wagner and Matthews, but DiVincenzo delivered a double-whammy with two unanswered three-pointers as the Wildcats opened up a 62-44 lead with eight minutes left.

From there, the Wolverines never looked like making up the lost ground and Spellman put Villanova 21 points clear at 79-58 with just under two minutes left.