New York, January 25, 2018 — The request was for a Van Gogh to adorn the walls of the president and first lady’s private residence in the White House.

The answer? No — but how about a fully functioning, 18-karat gold toilet instead? 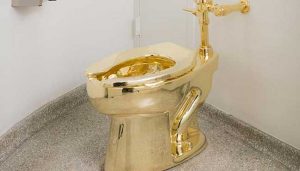 While it’s customary for US presidents to borrow works of art during their time in office, the Guggenheim in Donald Trump’s hometown of New York was polite, but firm in its refusal, The Washington Post reported.

When the White House requested the renowned Dutch painter’s “Landscape With Snow,” the museum’s chief curator — an outspoken Trump critic — countered that the 19th century painting was “prohibited from travel except for the rarest of occasions.”

“We are sorry not to be able to accommodate your original request,” wrote Nancy Spector in an email obtained by the Post, “but remain hopeful that this special offer may be of interest.”

Italian artist Maurizio Cattelan’s “America” — a gleaming gold toilet — was on display at the Guggenheim for nearly a year, installed in a restroom for the private use of members of the public with a guard posted outside.

Now that the exhibition was over, the artist would “like to offer it to the White House for a long-term loan,” the Post quoted Spector as emailing.

“It is, of course, extremely valuable and somewhat fragile, but we would provide all the instructions for its installation and care.”

Asked to explain the meaning of the installation and why he offered it to the Trumps, 57-year-old Cattelan told the Post: “What’s the point of our life? Everything seems absurd until we die and then it makes sense.”

The Guggenheim, asked by AFP, said it had “no further information to provide.” The White House did not immediately respond to an AFP query.

In a blog last August, Spector called the toilet “a cipher for the excesses of affluence” and said more than 100,000 people had queued “for the opportunity to commune with art and with nature.”

“Though crafted from millions of dollars’ worth of gold, the sculpture is actually a great leveler. As Cattelan has said, “Whatever you eat, a $200 lunch or a $2 hot dog, the results are the same, toilet-wise.”

Neither is it the first association between Trump, whose Manhattan home is famous for its lavish gold color scheme, and a golden toilet.

Last June, Trevor Noah’s “The Daily Show” hosted a free exhibition in New York lampooning the president, inviting the public to soak up his tweets and fire off one or two of their own from a golden toilet.