At Davos, delegates talk down Trump but bet big on America 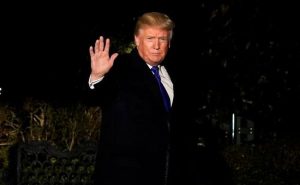 His privately owned luxury cruise operator, Silversea Cruises, registered an immediate pick-up in bookings from its main U.S. market and demand has continued to grow.

“Let’s face it, we should be grateful to Trump,” said Lefebvre d’Ovidio, a delegate to the World Economic Forum at the Swiss ski resort of Davos where Trump will speak on Friday.

“The economy is strong, and the American consumer is spending.”

As the world’s top policymakers and executives await Trump to address the Davos summit, they are privately voicing disbelief and disgruntlement at his foreign affairs, retreat on environmental issues and colorful tweeting.

African leaders feel insulted after Trump is said to have classified their countries as shit-holes, a comment he denies making. Latin American leaders are criticizing his retreat from a Pacific-wide trade pact. And some top executives say they have declined invitations to meet with him during the summit.

But with the U.S. stock market soaring, Trump’s corporate tax cuts padding companies’ pockets and U.S. consumers spending again, companies here are quietly applauding the U.S. president even as many Davos delegates see him as an unwelcome outsider.

“On the values front, it’s hard to see the international elite here in Davos applauding Trump, but on the wallet side of things, it may be different. That is the fundamental tension,” said Helene Rey, economics professor at London Business School.

Some government leaders, economists and bankers are warning against an overheating of the U.S. economy, an increase to the $20 trillion national debt and a “race to the bottom” on tax cuts. All the same, firms have high hopes for the U.S. market.

Kim Fausing, chief executive of Danish group Danfoss, which makes air conditioning and heating systems, said the company was committed to the U.S. market, where it has a dozen factories.

“This is a market that rules itself without too much intervention from the state, so it’s a very attractive market for any company,” Fausing said.

Hussain Sajwani, chairman and founder of UAE property firm Damac, is a friend of Trump and his main business partner in the Gulf region. He is looking more favorably at the United States after Congress passed Trump’s corporate and personal tax cuts.

“We were looking at property development in the States and the previous tax brackets were not very attractive and now they’re more attractive,” said Sajwani, who owns Damac Hills, a major development that includes the Trump International Golf Club in Dubai.

Bob Dudley, chief executive of oil major BP, said he believed the United States was not the only good destination for oil companies. But he added that the tax cut “certainly makes the United States more competitive”.

Trump’s $1.5 trillion tax plan unveiled in December slashed the corporate rate from 35 percent to 21 percent and temporarily reduced the tax burden for most individuals as well.

In its wake, several U.S. companies have announced plans to increase investments, wages and bonuses. This week, JP Morgan Chase unveiled a $20 billion plan to hike wages, hire more people, open branches and expand its business — the most explicit response to the tax cuts of any major bank so far.

Two weeks ago, when Trump said he would attend the Davos summit, the assumption was that he would be entering a lion’s den of hostile global elites. And in the opening days, speakers criticized his administration for protectionist measures such as recent import tariffs on washing machines and solar panels — moves that Washington said would protect American jobs.

“I‘m from Africa, so the sentiment toward the U.S. president is not too positive right now,” said Jabu Moleketi, chairman of the Development Bank of Southern Africa.

French President Emmanuel Macron, in his keynote address, decried a “race to the bottom” that could emerge from countries lowering tax rates and trade wars, though he too plans to cut corporate tax rates over the next five years.

Beneath the criticism, though, a faint chorus of appreciation for some of Trump’s policies can be heard.

“I think he’s going to address this group and say well I understand a lot of you may not like me but if you look at your wallets you should love me,” said Harvard University economics professor Kenneth Rogoff.

At an early news conference on Monday, the International Monetary Fund cited U.S. tax cuts as one of the reasons for its upgraded forecasts for global economic growth.

“It’s been a very good year for non-U.S. listings. In fact I would say a significant percentage, north of 35 percent of the proceeds raised last year by companies on the New York stock exchange were from outside the United States,” Tuttle said.

Lefebvre d’Ovidio is extra-grateful to the U.S. administration, after the recent tax cut.

The original tax proposal included a cruise-ship tax provision, but Alaska’s U.S. senators helped strike that out on the basis it would have hurt Alaska’s vital tourism revenues.

Powell: Rate hikes may slow, but inflation fight hardly over