Warning: unlink(/tmp/jnewslibrary-HVcMa6.tmp): No such file or directory in /home/customer/www/gasiantimes.com/public_html/wp-admin/includes/class-wp-filesystem-ftpext.php on line 142
 Alabama defeated Georgia 26-23 in overtime win - Georgia Asian Times
ABOUT
Advertise in GAT
Contact us

Freshman quarterback Tua Tagovailoa led the charge for Alabama after starter Jalen Hurts struggled throughout the first half. Alabama fell behind 20-7 in the second half before scoring 16 unanswered points to tie the game.

With 3 seconds left in regulation, Andy Pappanastos missed a 36-yard field goal that would have won it.

Rodrigo Blankenship took the lead back for Georgia in the first overtime by drilling a 51-yard field goal. 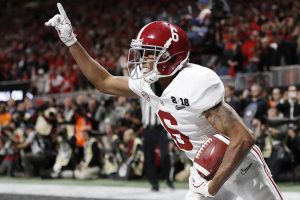 But Alabama answered with a touchdown on the second play of its possession to take the crown.

No. 3 Georgia was the higher ranked of the two teams, the deck was stacked against them, if only because of Saban's record against his previous assistants.

Saban went into the game 11-0 against his former disciples — a group that includes Smart, who coached under Saban both at LSU and for nine seasons at Alabama before leaving for Georgia at the end of the 2015 season.

The fourth-ranked Crimson Tide had to quiet doubters of their own after a 26-14 loss to Auburn in the Iron Bowl left them with a 11-1 regular-season record and shut out of the SEC Championship Game. Instead, the semifinals saw them dominate defending national champ Clemson with a 24-6 Sugar Bowl victory that served as a rematch of last year's title game.

Meanwhile, the Bulldogs edged out the No. 2 Oklahoma Sooners in their own semifinal game, rallying to win 54-48 in double-overtime at the Rose Bowl to improve to 13-1 on the season.

Monday night's game marked the first time in the four years of the College Football Playoff that the national championship game matched two teams from the same conference. Alabama also was involved that last time that happened, when the Crimson Tide beat LSU 21-0 in the 2012 BCS title game.


Warning: unlink(/tmp/jnewsfirstload-7yA137.tmp): No such file or directory in /home/customer/www/gasiantimes.com/public_html/wp-admin/includes/class-wp-filesystem-ftpext.php on line 142